Hevea brasiliensis, the rubber tree or Pará rubber tree, is a medium to large tropical tree in the Euphorbiaceae (spurge family) native to South America (the Brazilian and Bolivian region covering Amazon and Orinoco river basins), which produces a milky sap (latex) that is the primary source of natural rubber. Although some wild-grown trees are still tapped for their sap, most commercial production now comes from rubber tree plantations in southern and southeastern Asia (including Indonesia, Malaysia, and Sri Lanka), as well as western Africa.

Other species that contain latex that may be used for natural rubber production include gutta-percha (Palaquium gutta), rubber fig (Ficus elastica), and Panama rubber tree (Castilla elastica), although none are used to the same extent as H. brasiliensis.

The rubber tree may grow to 30 m (100 ft) or more where it occurs in the wild, although plantation trees generally reach heights of around 17 m (60 ft). The thick, leathery leaves, up to 60 cm (24 in) long, are compound, with 3 elliptic leaflets, each with entire (unserrated) margins and prominent secondary veins. The inflorescence is a many-flowered panicle (a much-branched cluster), up to 16 cm (6.5 in) long, with a small white petal-less female flower in the center, surrounded by small 5-lobed or dissected male flowers. The fruit is a large ellipsoidal capsule, usually 3-valved and 5 to 6 cm in diameter (2 to 2.5 in), containing gray-brown, flattened ellipsoidal seeds.

The sap, which can be harvested from the inner bark when the tree reaches 6 or 7 years, is obtained by tapping—cutting the bark and letting the sap drip out, then coagulated. Amazonian natives had long used the rubber that naturally forms from the latex, including to make balls used in early games, but the untreated rubber would become soft and sticky in the heat, and brittle in the cold. This problem was remedied by the chemical process known as vulcanization, developed by Charles Goodyear in the 1840s, which allows rubber to remain firm but flexible in all temperatures. Vulcanization allowed natural rubber products to become commercially successful, and promoted commercial plantations in tropical areas in Asia and Africa.

Synthetic rubber, which is processed from petroleum and was developed during the 1920s through 1940s, now makes up roughly 70% of the rubber manufactured worldwide, but natural rubber continues to have important uses in manufacturing and textiles. 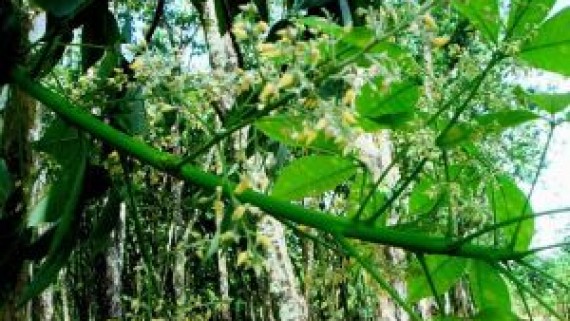